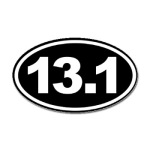 In my overachieving sort of way, I doubled the goal I set for myself last year: I completed, not the planned one, but two completely different half marathon races this month.  And I’ve learned that what runners talk about when they we talk about races is, of course, our time, our place in the pack, our aches and pains.  And we also talk about the course itself.   For the edification of no one but own self, and to prevent me from boring my friends and family on Facebook and in person with all the grueling details, I blog about running now.

So now, naturally, I want to go faster.  Not run a marathon (the idea of running for up to 4 hours just doesn’t do it for me), but to run the half marathon faster.  Obviously, I’m not going to win any medals, especially since the women in my age group are damned fast, but I want to at least try to do the 8 minute mile for most of the race (rather than the 9ish minute mile I’m at now): so 1 hour 45 minutes or so.  By next year? I’d say it’s possible.

For non runners, especially non running academics, who have bothered to read this far:

I know what you’re thinking. You’re thinking, what’s the appeal?  Who cares how fast you run? WHY would anyone want to run 13.1 miles, or run for nearly 2 hours?

I give you the pleasures of running half marathons:

Really, for that last reason alone, I recommend running. That and the ability to eat a bowl of cookie dough ice cream every day and not gain weight.

5 responses to “Half Marathons Are Not All Alike”

Annie Em is a professor of English who, like oodles of other academics, blogs about her work, her readings, her life. E-mail Annie at annieem [at] ymail [dot] com or leave a comment.